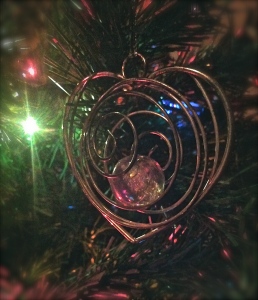 Probably the most recognizable and most quoted Scripture in all of the Bible is John 3:16,

“For God so loved the world, that He gave His one and only Son; that whoever believes in Him shall not perish but have eternal life.”

Gosh, I hate to say it, but I’ve been fighting for joy this Christmas season. The weather’s not helping. The clouds have been relentless, the rain horrendous. Yesterday it rained so hard and so much the streets flooded. And there I was in the middle of it.

For the first time in a long, long time I broke that rule. My Jazzy was sick. Very sick. So sick she could barely stand up. She could hardly walk. She quit eating. She quit drinking. She trembled. I had to carry her up and down the porch steps to go to the bathroom. I thought my dog was dying. When I called her veterinarian on Tuesday afternoon the only appointment he had was Christmas Eve. What else could I do?

So yesterday morning at 8:30, I picked Jazzy up and carried her to the car in the pouring down rain. As I was driving the 18 or so miles to the vet’s office I crept along the highway with a few other half-crazy drivers strong enough to brave the torrent, traveling along at 45 miles per hour because visibility was so poor, you wouldn’t believe how God spoke to me.

I was frustrated and because I believe in being honest with God about what I’m feeling in my heart I told Him so. I was sick of rain. I was sick of dark skies. I was sick about some things that hadn’t been going my way lately. Sick of battling fear and anxiety. Sick of worrying about my dog, for Pete’s sake. Oh, I admit, some of my rant was ridiculously petty and small in the grand scheme of things, but some of it was big. At least to me. And then….out of nowhere….I heard the melody and words from this really secular, completely UN-spiritual song,

The things we do for love….

When there’s nowhere to go

And you’re feeling like a part of you is dying

And you’re looking for the answer in her eyes (The Things We Do For Love, Hit song by the British Band, 10cc, in 1976)

I was a teenager back in the 1970’s. I graduated in 1976, the year this song was a hit. Since I don’t hear well, I never knew all the words to this song. I didn’t listen to the radio or buy a lot of records. Most of the time I just learned words to songs as I heard my friends sing them. I longed to be able to join in with them, but to tell you the truth it’s probably better that I didn’t. Hearing impaired people don’t always sing on key. At least I don’t. I may think I do. My family has made it very clear that I don’t, but I think hearing impaired people are blessed in a special way. They often learn to be content with silence. Maybe that’s why God speaks to me in such unconventional ways. When the words to this song began to play in my mind, God shut my mouth and ended my rant.

The thing I did for love…

When there’s nowhere to go

And you’re feeling like a part of you is dying

There in the midst of my tears, in the middle of a downpour on Christmas Eve, God reminded me that when the rain is a torrent and roads are flooded and people I love are hurting He loves in a way that I can’t. He can go where I can’t. He can reach people I can’t. He can heal hurts I can’t. All because He loves. Not just a little. But a lot. Enough to fill a river.

Too  many broken hearts have fallen in the river

Too many lonely souls have drifted out to sea

You lay your bets and then you pay the price

God sent His Son. His name is Jesus and everything about Him is love. His love pulls broken hearts out of rivers and lonely souls out of seas. I can’t take love out of Him. I can think He doesn’t love, if I want to. I can say He doesn’t love, I can even believe in my heart that He doesn’t, but why would I? I know it wouldn’t be true. Not to me. There are just some things no one can take away from me. I can’t separate God’s love from Him and I can’t separate the Father from His Son. They are One.

“This is how God showed His love among us; He sent His one and only Son into the world that we might live through Him.” 1 John 4:9

“But God demonstrates His own love for us in this: While we were still sinners, Christ died for us.” Romans 5:8

I can never, ever be separated from the love of God that I have in Christ Jesus. I can try, but I’d waste a lot of energy. I can try running like Jonah or hiding like Adam and Eve, but I’d waste a lot of time. I’d rather live in this love than live apart from it because I’ve found that the love of Jesus is an amazing thing. He was born to be the greatest gift I’ve ever known. He gave me His life. This love is a powerful thing…

For God so loved the world…For God loved to such a great extent….For God loved extremely…Like a downpour…Like a flood…that He sent His only Son.

This is the thing God did for love.

So Jazzy stayed with the vet yesterday. He took some x-rays, gave her fluids through an IV, started her on some pain and anti-inflammatory medications and I’m happy to say she came back home. We’ll be monitoring her arthritis and learning to manage it over the next few years, I guess. She slept well and this morning she seems her usual, energetic self. She keeps coming to me, laying her head on my leg, nudging me for a hug and attention. She needs reassurance because the clouds are still looming outside and we’ll most likely see some more rain, but love is in the air.